A short essay on the portuguese colonisation of Sri Lanka

The Portuguese Period of Sri Lankan history spanned from 1505 to 1658. The first Portuguese visiting Ceylon was Dom Lourenço de Almeida in 1505 after a storm drove his ship to the island’s coast near Galle. A memorial of this first landing, a cross made of stone displaying the Portuguese royal Coat of arms, was erected on a boulder overlooking the Bay of Colombo. This first expedition built a wooden chapel and a factory in Colombo that were abandoned a few years later.

At the time the island was divided into four kingdoms: Kotte, Sitawaka, Kandy and Jaffna. A treaty was concluded with the King of Ceylon residing in Kotte, some two hours by foot from Colombo.

In 1518 Viceroy Lopo Soares de Albergaria landed in Colombo with a large fleet where the Portuguese began to build a fort called “Santa Bárbara”. This triangular fort surmounted by a central tower was besieged by the Sinhalese. Around 1524 the Portuguese had to abandon it.

The Portuguese kept an agent on the Island under the protection of the Singhalese King of Kotte. The Mappillas (Malabar Muslims), who up to 1539 waged a dynastic conflict in the Kingdoms of Sitavaka and Kotte, opposed the Portuguese presence in Ceylon. Martin Alfonso de Sousa defeated the Mappillas at Vedelai in 1538, as did Miguel Ferreira at Negombo in 1539. It was around this period that Portuguese missionaries began the work of converting the locals to Christianity. It is reported that the King of Jaffna massacred more than 600 Christians on the island of Mannar in 1544 but in 1545 the same King is said to have paid tribute to the Portuguese.

In October 1550 Viceroy Alfonso de Noronha arrived in Ceylon with 500 Portuguese soldiers, who occupied Kotte and sacked Sitawaka. Through the action of Portuguese missionaries, around 70.000 locals residing on the coast south of Colombo were converted to Christianity by 1556. The King of Kotte, Dharmapala were also converted to Christianity (rechristened as Dom João Perya Bandara) and the Queen (rechristened as Dona Catherina). Following the King’s example, a few nobles adopted the Portuguese title of Dom (Sir), the Portuguese manners and language. These conversions proved to be a serious mistake as they alienated themselves from the majority of the Sinhalese population.

In 1560 Viceroy Dom Constantino de Bragança with 1.200 men conquered the town of Nallur, the capital city of the Kingdom of Jaffna, and soon afterwards the Viceroy proceeded to the island of Mannar where he built a fort. It was in July 1565 that the Portuguese decided to transfer the Court and the capital to Colombo, bringing an end to the splendour of Kotte.

In August 1587, Raja Sinha, the King of Kandy and Sitawaka, began the siege of Colombo. The Portuguese town was protected by fortifications with 12 bastions which the Sinhalese assaulted many times but failed at every attempt. In February 1588, the Sinhalese finally decided to abandon their siege.

Till the very end of the XVIIth century, the Portuguese were masters of the coastal areas of Colombo, Galle, Kalutara and Negombo. In 1591 Andre Furtado de Mendonça invaded Jaffna and nominated a new king at Nallur. The Portuguese occupied Kandy for a brief period in 1592, but after a few weeks they were forced to withdraw.

On 27 May 1597 King Dom João Dharmapala died in Colombo without an heir and in accordance with his will, his Kingdom was donated to the King of Portugal. Thus, as King Philip of the then United Kingdoms of Spain and Portugal was proclaimed King of Ceylon, the whole of the territory of the Kingdom of Kotte (except that of Kandy) was thus under the control of the Portuguese.

The major cause of discord between the Portuguese and the local Sinhalese were the attempts by the former to convert the latter into Christianity. The Sinhalese eventually knocked on the doors of the Dutch Empire for help. 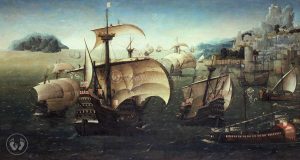